Both a Caribbean English patois and standard Spanish are spoken in Roatan, and most schools teach courses in both languages. The current population of Roatan is approximately 60,000.

The Lempira is the official currency of Honduras but US dollars accepted throughout Roatan and can be used in most parts of the island. Credit Cards can also be used in larger stores and restaurants, but not all.

It’s a good idea to have smaller denominations in US Dollars for arrival (making getting change easier). Also ripped or torn bills are not accepted by stores or local banks as they have no way to remove them from service. In short, travelers should bring clean, crisp bills.

ATM machines are in busier areas, in gas stations and grocery stores, but there are limits on withdrawal amounts, so if you have to pay for something over a few hundred dollars in cash, several trips might be necessary. Western Union and Money Gram services are also available in Coxen Hole, but funds will only be available in Lempiras.

For residents of most western countries to enter Honduras or Roatan you only require a valid passport. Once in Honduras or Roatan you can stay 30 days in the country. A visitor’s extension is possible to a total stay of 90 days at which point tourists are required to leave the country for three days. Visa extensions can be obtained at the immigration office on Roatan is located above Plaza Mar grocery in Coxen Hole.

Light and casual clothing in breathable fabrics is best. The Roatan climate is warm all year round except for in December and January. A long sleeved sweatshirt and shoes are necessary at times during these months. A rain jacket is a must, as are sandals and a bathing suit for the beach, and sturdy hiking boots for walks and hikes. Sunscreen, sunglasses and a hat are needed all times of the year. Bug repellent is also needed mainly for nights on the beach.

Always tag or label all of your luggage when flying to and from Roatan AND put your name and address on a paper inside each bag.

Whether you are looking to buy, sell, or rent a home, explore the market, or determine the value of your home, Roatan Life is the real estate company for you. Give us a call or drop in to experience all we have to offer. 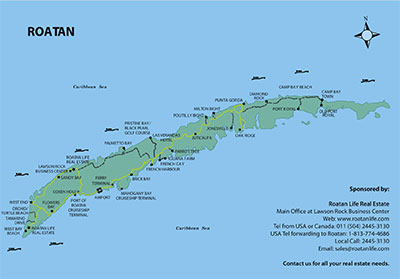 Keep up to date on the latest real estate news, what's happening on the island and learn invaluable tips for navigating your new life in Roatan.